This review of Utage rounds out what I think of as the “Big Three” of Okinawan restaurants in Hawaii: Hide-Chan, Sunrise and Utage.  In this post, we spotlight Utage or the “Gathering Place.”

Utage has been open for 12 years in the City Square Shopping Center in Kalihi. At the core of it is owner Jocelyn Kishimoto.

Jocelyn was born in Ginowan City. She came to Hawaii in 1974 at the age of 14 to join her grandmother. Jocelyn worked as a waitress during high school, got married and managed a Chinese restaurant for 17 years. She then worked for an aunt, who owned Violet’s Grill, for three years. While there, Jocelyn was persuaded to take over a space in City Square and open up her own place, which she did with the help of her mother and her three kids.

Utage is still a family run business. Jocelyn is the big boss who both manages and cooks. Daughter Edna took over front of house and son Ivan is managing the kitchen. You really get a sense of ohana when you are in Utage. 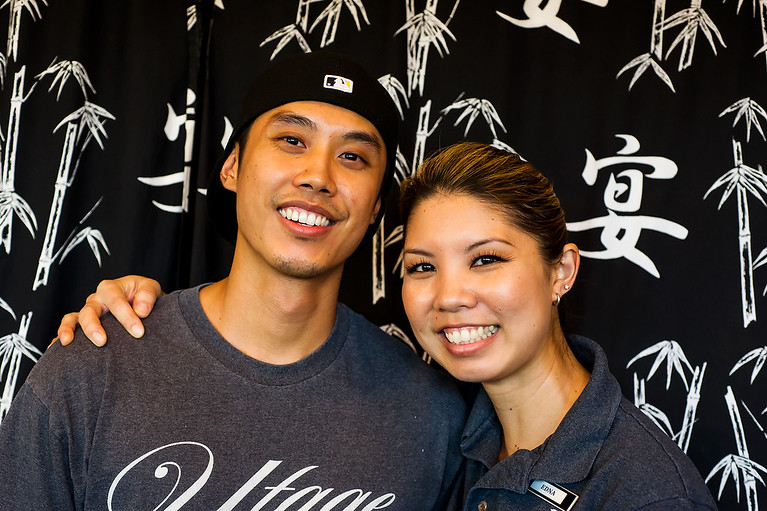 Jocelyn stresses that they try to take care of their customers, like preparing lighter fare for senior citizens or providing healthier options. They also try to offer diners a lot of choices, especially for families struggling to find places that kids will also want to eat at.

Utage is open Monday to Saturday from 10 am to 8:45 pm. They recently renovated the space and removed the booth seating, so the restaurant can now seat up to 60 people and accommodate large parties. They can do private parties but you need to make arrangements in advance. Utage has a lot of regulars, so it is best to call 843.8109 to make reservations.

They accept cash or credit card (Discover, MC, VISA, JCB). Utage is NOT a BYOB. They sell Orion Beer, wine and sake, with a $10 per bottle corkage fee.

Parking at City Square is free but fills up fast during lunch hours. If the parking lot is full, there is ample metered parking on the street. At night, parking is not an issue.

All of the dishes at Utage are a “set” meal that comes with soup or salad, a drink and dessert. Most of the dishes are priced at $15-$16. It’s nostalgic of the old Okinawan owned restaurants that would offer complete meals.

Okinawan dishes include a nice variety of Chanpuru, Soups, Yakisoba, Nakami and Rafute. Full menu can be viewed online at: utagehawaii.com

What caught my eye was that they have Green River! I was taken back to small kid time as I slurped my unnaturally green drink as we waited for our food!

Rafute. First thing you notice about the shoyu pork is that it is a little on the sweeter side. Utage’s rafute is not made with liquor (sake or awamori) to make it a kid friendly option. The pork belly is a nice ratio of pork and fat. I found it very tender with nice flavor!

You get a lot of pork, too. I ended up taking my leftover rafute home and freezing it. Used it to garnish Okinawan soba made at home.

Most people order the chanpuru dishes with rafute, so there is a mix of meat and veggies.

I opted for Shoyu Pork. The Chanpuru at Utage is distinctly “wetter” than the other Hawaii Okinawa restaurants. Jocelyn explains the reason is that she tries to avoid having to fry with oil to make the dish less greasy and healthier. Flavors in this dish work well and the portions of goya and rafute are generous. I really appreciate that each of the Big Three has distinctly different chanpuru styles for us to enjoy!

Pigs Feet Soup. First impression of broth is lightness, and then we dug in and were awed at the huge portion of hock that emerged! I didn’t even notice the seaweed, mustard cabbage and daikon.

We had to ask for a knife to cut through the pig hock and were delighted at how much meat and gelatin we found.

Nabera (Squash) Chanpuru. I was really intrigued by this dish. Chef Roy Yamaguchi recently named Utage’s Goya Chanpuru and the Nabera Chanpuru as two dishes to try in Honolulu Magazine.

Nabera is hard to come by, so Utage uses a Chinese variety that is very similar. The chanpuru came in a light miso sauce and was more soup than stir fry. I found the nabera refreshing to eat, with the miso really enhancing the flavor of all the ingredients.

Jocelyn mentioned that the old school way of making nabera chanpuru is with spam that is not cut but squeezed by hand!

Utage has a call list for daily specials. A handwritten list with phone numbers that an employee calls to notify customers about their favorite specials! Who does that anymore?! And how awesome is that?! The most popular item is the Konbu Maki that they only make 2x a year (August 19th Anniversary and Okinawan New Year). Psst! They also make andagi on those two dates to give out as thank you gifts to customers!